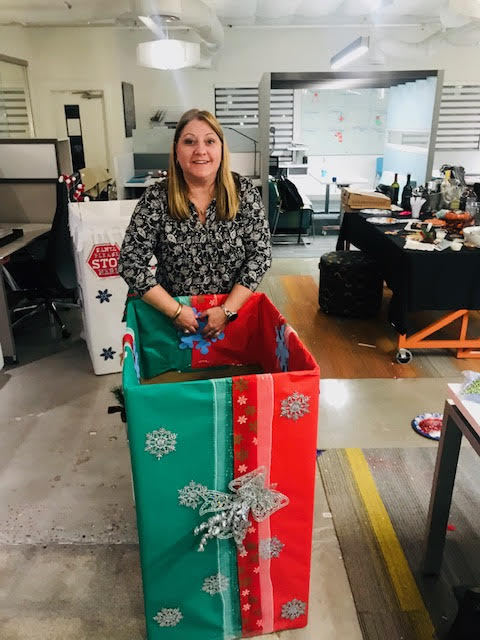 The sound of rustling papers, happy chatter, and staplers clicking filled the Wetmore office of CORE (Commercial Office Resource Environments) the evening of Tuesday, Oct. 29, 2019. Rather than filling orders for office desks, chairs, or educational or medical furniture, the women of CORE and several other volunteers turned into Santa’s elves. Roughly 10 people spent time building beautiful donation boxes to capture the clothing needed to fill the shelves and hangers at the Spreading Threads Clothing Bank.

“We had so much fun,” said Mercedes Flores, principal of CORE. “Every year we pick a charity to work with during the holidays. Last year we chose Casa de los Niños. This year we chose Spreading Threads because they offer an invaluable service to Arizona foster families.”

Whether in foster care or in a group home, one of the most difficult things about being a foster child is accessing the resources needed such as clothing. That’s where Spreading Threads can help, according to Michele Wright who founded the Spreading Threads Clothing Bank with her wife, Michele Bennett, just last year.

“I have been a foster parent for almost 18 years,” said Michele Wright, who adopted three foster children with her wife. The couple is currently working on its fourth adoption. “In 2009, the state of Arizona cut the annual clothing allotment per child from $300 to $150, which it remains today. It’s ridiculous. Somebody needed to do something on the ground level that knew what the kids needed.”

That’s how Spreading Threads, now a 501(c)3 and a Qualifying Foster Care Charitable Organization through the Arizona Department of Revenue, came to fruition. The Spreading Threads Clothing Bank accepts donations of new and gently used clothing for foster children of all ages, birth to age 18, as well as books, toys, backpacks, toiletries, other items foster children can use. Foster children, their families, and group homes then come in and “shop” the donations for free, taking what they need to supplement what the state provides.

Now Spreading Threads is settling into its new location near I-10 and Prince in the 85705 area code. Wright said this is the perfect location for the Spreading Threads Clothing Bank as the area code has one of the highest removal rates for children in Pima County.

Ironically enough, Wright once worked for a competitor of CORE in the same industry but now Wright and Flores get to work together for the betterment of foster children in the community.

“To have CORE’s help is amazing and it’s desperately needed because we are starting from scratch right now,” said Wright of the clothing drive CORE has put together. “It’s so cool to have community partners that have no strings attached. They just want to help.”

Flores, who is married with five children, three of whom are adopted, said anyone who has ever had to clothe a child knows $150 isn’t going to go very far.

“I think all children deserve to have their basic needs met including having clothing that gives them a sense of pride and dignity, which they are deserving of,” Flores said. “It’s the privilege of CORE to be able to work with Spreading Threads to assist Tucson’s foster children.”

“It was awesome to be a part of this,” said Cristina Arriaga, account manager for CORE. “Our hopes are so high that people will contribute to the needs of our foster children. I think foster children get left behind but I think through Spreading Threads, they can get the clothes they need. Kids need clothes that don’t look like they have been worn for years. These kids are so appreciative of what they are given because they have been in the foster system.”

Elaina Vasquez, director of customer experience at CORE, said she had a lot of fun participating in decorating the donation boxes for Spreading Threads.

“It is a really good way for us to give back as a small business to our community in some small way,” Vasquez said. “It’s really exciting to be able to see them get some new clothes because foster children don’t always get new things.”

The donation boxes decorated by the staff and volunteers at CORE have been distributed to various locations throughout Tucson. The boxes of donations will be picked up on Dec. 4, 2019, by CORE employees before being handed over to Spreading Threads. CORE is asking for the community to help them assist foster children and foster families with the basics during this season of giving.

Donations of the following are desperately needed, according to Wright, especially for school-aged children:

Donation boxes can be found at the following locations through Dec. 4, 2019:

The Church of Jesus Christ of Latter-Day Saints

If you would like to have a clothing donation box dropped off at your place of business, contact CORE at (520) 999-3470. CORE will gladly pick up the donation boxes on Dec. 4, 2019. You may also make a dollar-for-dollar, tax-deductible monetary donation to Spreading Threads Clothing Bank by calling Michele Wright at (520) 971-3237.